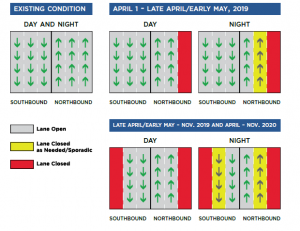 Beginning on April 1st, 2019 MassDOT will begin a two-year rehabilitation project of the Tobin Bridge and Chelsea Viaduct which together carry Route 1 through Chelsea, over the Mystic River, and into Boston. This project, known as the Tobin Bridge/Chelsea Curves Rehabilitation will ensure that the elevated portions of Route 1 which have not been significantly rehabilitated since the 1970’s can continue to safely and efficiently carry passenger and freight traffic in and out of Boston.

This vital project will have inevitable traffic impacts. The North Shore TMA is advising commuters to expect delays and to plan accordingly when traveling North and Southbound on Route 1 and anticipate spillover traffic onto other roadways. Commuters should utilize the commuter rail when possible. As a reminder, weekend commuter fares are just $10 for use the entire weekend, any zone.